An eager student of both the arts and the sciences Beatrix Potter’s childhood was equally enchanted by the discovery of a fairy grotto or a hibernating hedgehog.   She drew her own versions of countless fairytales including Cinderella, Sleeping Beauty, and Alice’s Adventures in Wonderland and discovered to the world of fairy ‘under the tyranny of [her] cross old nurse’, Anne Mackenzie, who introduced her to ‘witches, fairies and the creed of the terrible John Calvin’. Though the ‘set of fairy tales in thin volumes’ that she dreamt of writing did not come to pass, Potter’s love of combing the countryside for fungi and fairies alike can still be detected in much of her work.

One of her early sketches depicts Cinderella’s iconic pumpkin carriage driven by a pair of smartly dressed mice, each of whom are painstakingly attaching a harness to a fleet of chubby bunny rabbits.  The rabbits idly blink their eyes and lick their paws as though quite unaware of the job at hand and liable to forgo their newfound duty under the influence of a ill-placed lettuce patch. 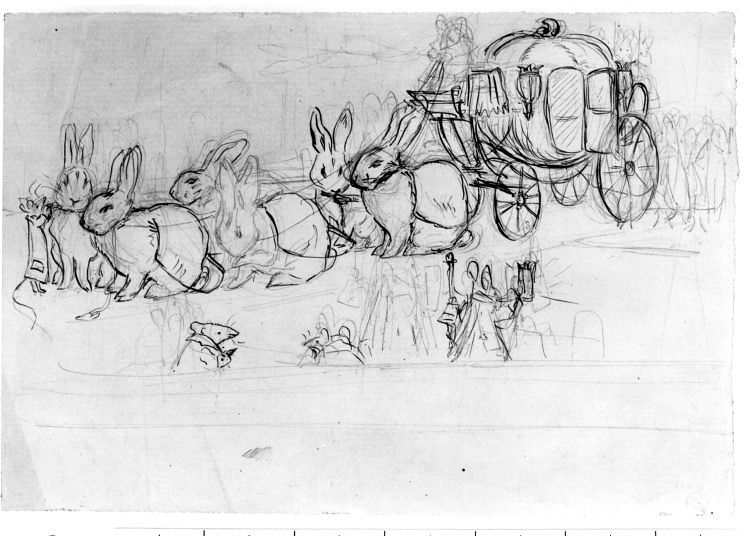 Potter uses a similar technique in her retelling of the little old woman who lived in a shoe – who is, of course, recast as a mouse. 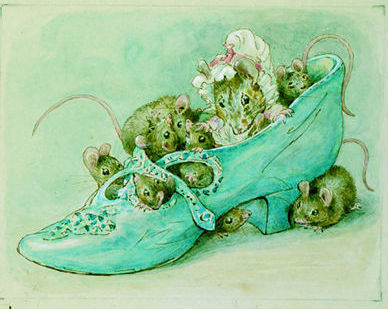 You know the old woman

who lived in a shoe?
And had so many children
She didn’t know what to do?

I think if she lived in
a little shoe-house-
That little old woman was
surely a mouse!

John Everett Millais, the Pre-Raphaelite painter famed for art that entwined the mythic and the natural at a microscopic level (see detail of Ophelia above) was impressed by Beatrix’s drawings as a child, stating, ‘plenty of people can draw but you and my son Johnny have observation.’ Beatrix herself disclosed how her love of detail began in childhood recalling that she could ‘remember quite plainly from the age of one and two years old; not only the facts, like learning to walk, but places and sentiments – the way things impressed a very young child.’

In a letter to Bertha Mahoney Miller, Potter further articulated her desire to make for herself ‘a fairy land amongst the wild flowers, the animals, fungi, mosses, woods and streams, all the thousand objects of the countryside’ and knit together ‘that pleasant unchanging world of realism and romance, which in our northern clime is stiffened by hard weather, a tough ancestry and the strength that comes from the hills’.

Beatrix’s manifesto to unite realism and romance is most explicitly attempted in a little known story named The Fairy Caravan. First published in 1929,  it is one of Potter’s later books. And was, by Beatrix’s own admission, never intended to be published at all:

Through many changing seasons these tales have walked and talked with me. They were not meant for printing; I have left them in the homely idiom of our old north country speech. I send them on the insistence of friends beyond the sea.

The story came to her as she walked alone in her beloved Lake District.

In a soft muddy spot on the old drove road I had found a multitude of un-shod footprints, much too small for horses foot marks, much too round for deer or sheep. I wondered were they foot marks of a troupe of fairy riders, riding down old King Gait into Hurd Wood and Hallilands – away into Fairyland and the blue distance of the hills. … The finding of those little fairy foot steps on the old drove road first made me aware of the fairy caravan.

Beatrix’s love of the minute is woven into the narrative of The Fairy Caravan.  In the story a miniature travelling circus, drawn by a pony and a highland terrier performs for the animals they pass on their travels, the magic fern seed woven in their hair shielding them from the eyes of humans.

Beatrix’s frequent visits to the Natural History Museum to study the insects demonstrates her ability to reap both a fantastical and factual harvest from nature. Her meticulously detailed microscopic studies, wrought with a dry brush as fine as a cat’s whisker, detail the minute beauty of the most fragile of specimens and convey her wish to see the phantasmagoric realm of fairyland and the realistic wonder of natural history in one vision.

The artist Cicely Mary Barker, best known for her Flower Fairies series has also been likened to Beatrix Potter in the botanical accuracy of the plants and flowers amidst which the fairies dwell. the Victoria and Albert Museum has set up a gorgeous virtual gallery comparing their work. As the V&A notes ‘both were strongly influenced by what Potter described as the Pre-Raphaelites’ ‘niggling but absolutely genuine admiration for copying natural details’.

Welcome to the Cabinet of Curiosity
April 5, 2016